Wolfgang Sandberger, born in 1961, has been professor for musicology and director of the Brahms-Institut at Musikhochschule Lübeck since 1999. After studying music (Violoncello under Eckhard Stahl) at Konservatorium Osnabrück and Musikhochschule Hannover, he completed a master’s degree in musicology (under Hans Joachim Marx), philosophy (under Klaus Oehler), and history (under Bernd Jürgen Wendt) in Münster and Hamburg, then completing a dissertation entitled »Das Bach-Bild Philipp Spittas«, which was awarded a prize by the Joachim Jungius-Gesellschaft der Wissenschaften. He has published widely on music history from the sixteenth to the twenty-first century (see list of publications), central field of expertise, next to the focus on Johannes Brahms include biographical history, reception history, and intellectual history.

Sandberger has also been active as a journalist in music broadcasting. From 1993 und 2003 he worked as a freelance reporter for NDR, where he was »on air« with around 150 shows each year. In 1998 and 1999, he also took on substitutions in the editorial teams »Early Music« and »Feature« of WDR. As a writer and presenter, he continues working for various ARD radio broadcasts (currently: Musikstunde, SWR 2; Klassikforum, WDR). He also advises several festivals, for example, Göttingen’s Handel Festival. Since 2013, he has been project director of the Brahms Festival at Musikhochschule Lübeck.

Sandberger’s projects and conferences have been focused largely at the Brahms-Institut at Musikhochschule Lübeck. Here, Sandberger has managed several projects on cataloguing and documenting the holdings and the DFG project Brahms-Briefwechsel-Verzeichnis (Brahms Correspondence Index, 2006–2009). With funding from the federal state of Schleswig-Holstein and other sources, the collection is currently being digitized, at the moment the focus is on building up a digital databank of all holdings. Since 2003, he has secured more than one million euros in grant money for the digitization projects alone.

Sandberger has been organizer and head of numerous conferences and symposiums, including: »Bach, Lübeck und die norddeutsche Musiktradition« (2000), »Brahms und die Musikforschung seiner Zeit« as part of the annual conference of the Gesellschaft für Musikforschung (2003), the Furtwängler-Symposion (2004) and the Buxtehude-Symposion (2007) in Lübeck. Since 2005, Sandberger has been responsible for planning the annual conferences held as part of Göttingen’s Handel Festival (see Göttinger Händel-Beiträge, 2005–2013 together with Hans Joachim Marx, later with Laurenz Lütteken). Since 2014, he conceived the annual festival conference of the Schleswig-Holstein Musik Festival. In 2018, he directed a conference held by VolkswagenStiftung in Herrenhausen (together with Christiane Wiesenfeldt).

He has also organized several exhibitions at the Institut (together with Stefan Weymar), which are documented in the cataloguees of the institute (published by et+k in Munich). 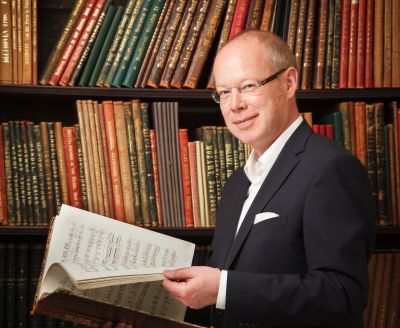